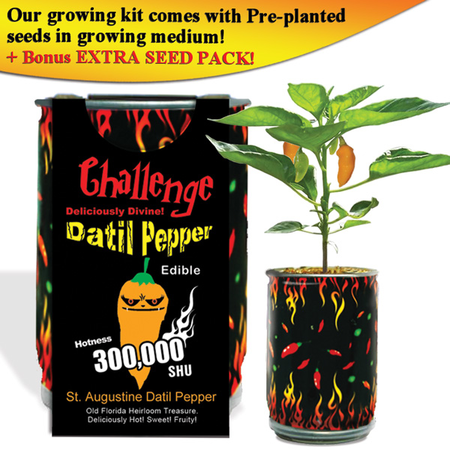 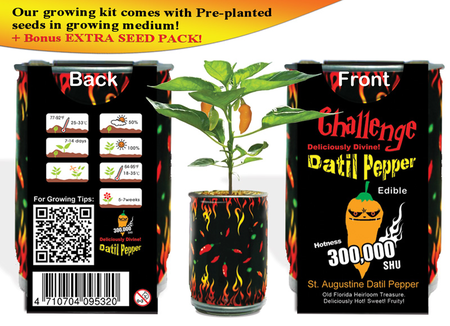 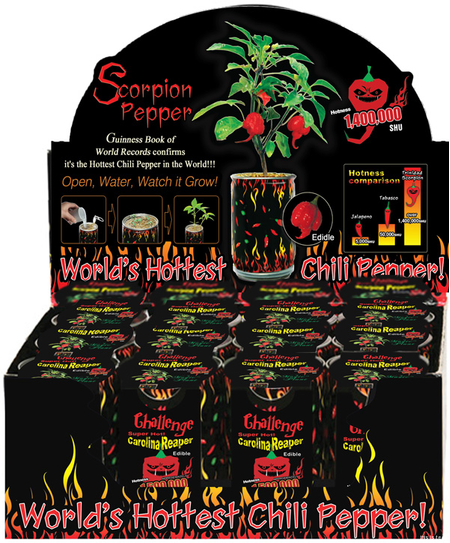 The incredibly tasty Datil pepper is thinner and longer than a Habanero.  This pepper can be as long as 3.5 inches and will turn a yellow-orange color or red when fully ripe.  The Datil is similar to the African Fatalii pepper in looks and heat level.  he Datil Pepper is a bit sweeter than the Habanero, having more in common with the Scotch Bonnet when it comes to sweetness.  However, the Datil is more mellow, where the Scotch Bonnet is more earthy.

Datil peppers range between 100,000 and 300,000 SHU on the Scoville Heat Unit scale. They are very close in heat to the Habanero and Scotch Bonnet.  Just as a frame of reference, this pepper is about 60 times hotter than a jalapeno – but can be as much as 120 times hotter.  That’s hot!

Datil peppers are grown in the St. Augustine, Florida area and have been cultivated in that area for a long time.  However, it is believed that they were introduced to the region in the late 1800s by indentured workers from Minorca, Spain.  There is a lot of debate surrounding how the seeds ended up in Florida since they are nonnative to either Florida nor Spain.  Some have proposed the first seeds came from Cuba during a similar time period.  Local lore seems to support Minorca as the true origin. Families of the original Minorcan settlers in the area still grow Datil peppers.  Each year, there is a Datil pepper cookoff festival held in the area.

How to use the Datil Pepper

The Datil pepper makes a delicious hot sauce and is used to make a wide variety of condiments.  This pepper offers a wonderful flavor, and adds much spice and heat to hot sauces, mustards, barbeque sauces, relishes, and jams and jellies.  The Datil can also be pickled.  Add the pepper or the sauce to stews, eggs, casseroles, and just about any of your other favorite dishes.  It is delicious mixed with cream cheese and served on crackers.  If you travel to St. Augustine, you’ll find a number of local dishes that include the hot peppers such as Datil shrimp with grits, chocolate-covered datil peppers, and datil chicken wings.

Datil pepper plants reach between two and two-and-a-half feet in height.  Like other peppers, they grow best in warmer regions that have at least 90 days of frost-free weather each year.  However, in cooler climates, gardeners have had good luck growing them outside if they start them indoors about 8 to 10 weeks before the last expected frost.

To start the seeds indoors, fill peat pots or seedling trays with soil and place a datil pepper seed in each section. Cover the seed completely and firm up the soil just a bit.  Put the container on something warm such as the top of the fridge, or on a heat mat and make sure it’s near a bright light. Near a window is best, but near bright fluorescent lights or grow lights work well too. If you use a heat mat, it should be set on 78 to 85 degrees F.

The germination process takes around 10 to 15 days, sometimes longer.  During this time make sure to keep the potting soil moist, but not wet, like peppers and other nightshade plants are susceptible to “Damping Off Disease”, a fungal disease.  After the seedlings emerge, lower the temperature to 65 degrees.  Once the temperatures outside reach 70 degrees and the soil is at least 65 degrees, prepare a raised bed. Mix the soil and compost together with a cultivator. Soil to compost ratio should be 2 soil/1 compost. You can also add some sand, as these peppers like sandy soil.

Dig a hole large enough for the plant and remove the peat pot bottoms.  Holes should be spaced about 2 feet apart or a little more.  Place the pots inside the holes and fill them in with soil.  Plants should be watered immediately after transplanting. To avoid overwatering, let the soil dry out before watering it again. Once the plants blossom, apply fish emulsion type fertilizer.

• You may plant buds elsewhere in a planting pot or in-ground.

• Without plenty of light, growth may become slow and the plant may wither.

• Water ONLY when soil's surface is dry.

• Take the center bud off when the plant reaches to 3.5 inches (10 cm) high to stimulate growth