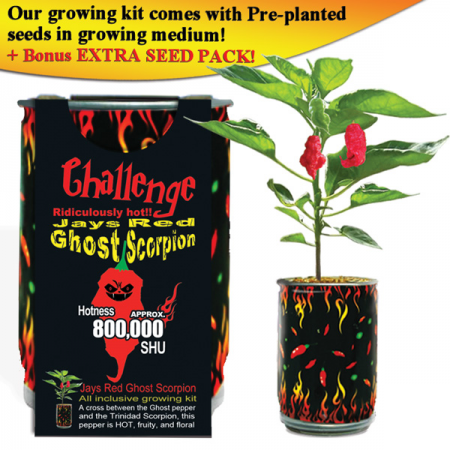 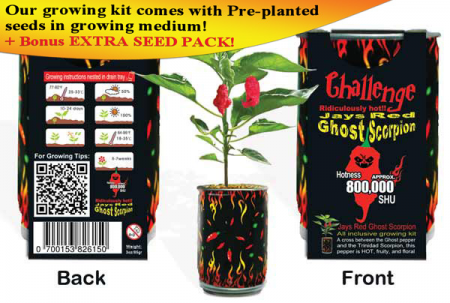 Jays Red Ghost Scorpion hot pepper is new to the Superhot pepper scene.  This pepper packs heat close to that of the Trinidad Moruga Scorpion.  This pepper ripens into a deep, rich red color.   Jays Red Ghost Scorpion grows into a variety of shapes with some of the pods having tails.  The flesh of this pepper is similar in appearance to the ghost chili in that the flesh it is bumpy and twisted.  The Jays Red taste is somewhat floral, but isn’t as acidic as other peppers like the Butch T Scorpion chili pepper.  As far as SHUs, Jays Red ranks between 500,000 and 1 million! So, you can believe it is HOT!

The extremely hot Jays Red is a cross between the Trinidad Scorpion and the Bhut Jolokia Red chili.  A farmer, Jay, in eastern Pennsylvania developed the chili pepper. This is a relatively new pepper so it’s not quite stable, meaning some pod variations still occur.

How to use Jays Red Ghost Scorpion Pepper

The best way to use Jays Red Scorpion pepper is with caution!  Remember, they are very hot.  The heat of this pepper must be respected, and it will make a great salsa or hot sauce.  Peppers can be roasted or dried and added to recipes at the cook’s discretion.   Add them sparingly at first until you are sure you have a tolerance level that can handle the heat.  The slightly floral, slightly citrus flavor makes a wonderful addition to soups, stews and dishes of all kinds.

Pepper seeds are not usually planted directly in the garden.  However, warmer regions that have long growing seasons may try planting seeds directly outside in the soil.  I t is worth noting, peppers can be a bit finicky.  To ensure success, place the pepper seeds between two damp paper towels and place them in a zipper bag. Then put the bag in a warm place, like the top of the fridge.  After the seeds start to sprout, you may plant the seeds in individual containers.  After the plant begins to grow leaves, the plants can be moved into a sunny area of your home until they can be transplanted outside in the garden.  The peppers won’t survive outside until the average temperatures at night are between 55 and 60 degrees (F).

Pepper plants like water and will need moderate amounts of water from the time they sprout until the season’s end. Do not saturate the soil. The soil should drain well and still hold enough water to help the plants produce.  Too much nitrogen fertilizer makes a plant leafy without many pods.  Fish Emulsion fertilizer is best for peppers.