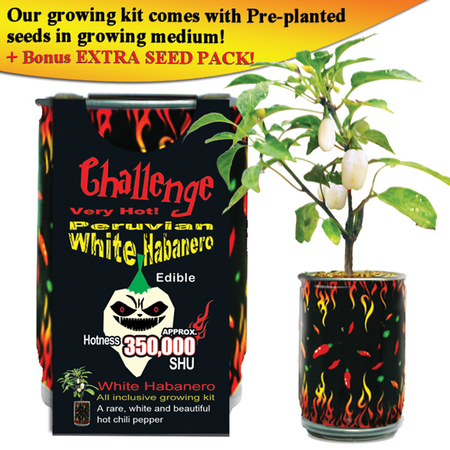 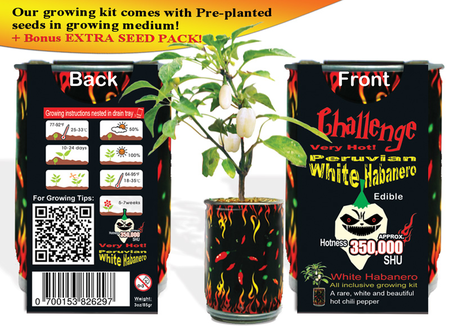 Don’t let the softer shades of white fool you.  The White Habanero chili pepper may look cooler than its orange cousin, but it still packs the heat.   It’s at least as hot as other Habaneros, and has a nice fruity flavor with some smoky undertones.  Some people like to grow this variety just because it is a lovely ornamental, too.  White Habaneros have been compared to jelly beans, but that’s one HOT jelly bean!  It may look like it’s not hot, but it ranks between 100,000 to 350,000 Scoville heat units, just like the more common orange Habanero. Most think it is just a bit hotter on average.

These chilies are shaped like a thin lantern, or a jelly bean, and grow to be up to two inches in length. However, they are thinner than other Habaneros, as they are only around ¾ of an inch in width.  They are smallish chili peppers and you can hold several of them in the palm of your hand.  The White Habanero berry starts out green and gradually ages to light yellow and then turns into its creamy white hue.  One plant produces dozens of chili pepper berries all at one time.

History of the White Habanero

The White Habanero is sometimes called the “Peruvian White Habanero.”  It is thought to have originated in Peru.  However, there has been quite a bit of debate regarding whether this white pepper got its start in Peru, or was cultivated in Mexico.  Some even make the differentiation in the name by using “Yucatan White Habanero.”  No matter where they are from they are often used in traditional Mexican salsas and stews.  Their influence has been noted in Caribbean cuisine where they are often used in marinades and sauces.

How to Use the White Habanero Pepper

The white habanero is complementary to both the Caribbean and Mexican cuisines, just like the orange ones.  They add spice to marinades, hot sauce, and soups . Many people like to use them in their salsa recipe it adds a smoky, but sweet flavor and the unique white color is an additional treat that makes salsa more visually pleasing.

Heat Level Groups (by SHU):
Hot (Chilies that range from 30,000 to 200,000 SHU)
Packaging Type:
Ready For Retail
Species:
Capsicum Chinense
Pepper's Name:
Thank you for your post.
You can keep them grow a bit bigger but it is recommended to relocate each sprout (except one) to a bigger growing area where they grow better.