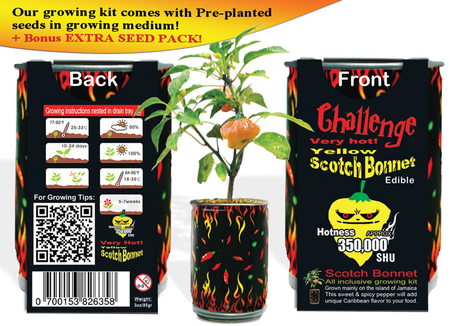 The Scotch Bonnet yellow pepper is a highly popular pepper from Jamaica.  Use it to add a little spicy Caribbean kick to meals and side dishes.  The color is beautiful and its shape interesting. As far as “hot” goes, the yellow Scotch Bonnet ranks between 100,000 and 350,000 SHUs.  It is close to the Habanero when it comes to heat levels, but its flavor is quite different.  Behind its intense heat is a hint of sweetness.  Some compare its flavor to that of tomato with just a hint of fruity apple and cherry.

The origin of the Scotch Bonnet yellow pepper is Central and South America.  There’s no definite proof as to where the chili was first cultivated.  The Scotch Bonnet pepper is the first pepper from the Caribbean to be given a specific name in the export market.   As early as 1767, it was called the Bonnet or “Goat Pepper” due to its pungent aroma. It remains one of Jamaica’s major agricultural exports.   It is usually sold fresh, but can also be used as an ingredient in products to be exported.

The absolute best conditions for cultivating the yellow Scotch Bonnet include lots of sunlight and well-drained, sandy soil.  Seedlings should be transplanted in the evening.  Seedlings need adequate water in order to produce lots of fruit.  Drip irrigation works best as wet leaves on the pepper plants encourage Phytophthora, a fungal disease of nightshade plants.   Pepper plants are vulnerable to pests and diseases so it’s important to weed them and use pest control.   Peppers appear and are ready to harvest in about 12 weeks after the seedlings are planted.  Mature fruit is ready to be harvested when there is a little yellow showing and the pepper is still green.