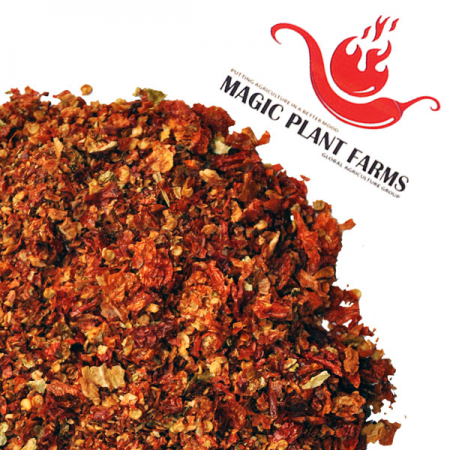 The ghost pepper is also referred to as the bhut jolokia and the red naga. As recent as 2007 the ghost pepper was registered in the Guiness Book of World Records as the hottest pepper in the world. On the Scoville heat scale it is ranked at a whopping 1,000,000. But it wasn’t hot enough to be outranked by the Infinity chili which officially became the hottest chili in 2011. Then in 2012, the Trinidad moruga scorpion took the title as the hottest pepper, only to be replaced by the Carolina Reaper in 2013.

History of the Ghost Pepper

The ghost pepper has its roots in the Northeastern regions of India. It is also found in Bangladesh and even in Sri Lanka. It is known as the bhut jolokia in these regions and became known as the “ghost” pepper once it reached the Western world.

Ghost peppers change colors as they ripen and can be red, yellow, orange or even brown or chocolate in color. The plant can produce numerous peppers which have very unique pods. Red ghost peppers can be smooth skinned, or they can be rougher and have a dented appearance. Plants that are taller tend to produce rougher peppers but the plants that yield smooth fruit usually produce a lot more peppers. This could be due to the stronger, sturdier branches. The hotness of the pepper can vary based on the conditions it is grown in. If the weather is drier, the ghost chili will not be as hot as those grown in moist conditions.

Uses of the Ghost Chili

The ghost pepper can be eaten fresh, but is also often dried. Dried peppers are used to spice up and add flavor to a variety of dishes such as chutneys, curries or pickles. It is also added to meat and fish dishes because of its distinct flavor. But they also have some important non-food uses such as using them to make smoke bombs or made into a paste to smear on fences to keep certain animals away. Because of the intense heat of this chili pepper it is also used in chili pepper eating competitions.

In India, where the pepper originated, it is commonly used alongside meals. However, it also has other uses throughout India and Bangladesh. In these regions it is used to treat stomach aches and to relieve heat in the summer. The ghost can be used just like a habanero is used, but note that it is as much as 5 times hotter than the popular habanero.