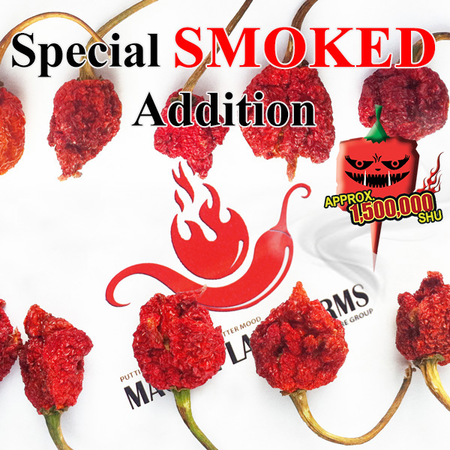 All About the Carolina Reaper Pepper

You won’t find a pepper more extreme than the Carolina Reaper pepper.  It became the official hottest pepper in the world in 2013.  Although a couple of potential peppers have risen to challenge that official title, they haven’t lasted or been proven to be hotter than the reaper which averages 1,641,000 Scoville Heat Units with some pepper measuring as high as 2,200,000 SHUs.  Scoville Heat Units are accepted across the board as the way to measure heat for chili peppers.

Originally, Carolina Reaper peppers were red and that is still the most common color today.  However, there are some other ones like the chocolate, peach, and yellow reapers.  Of course, the red peppers start out as green and then turn orange before ripening to their deep red hue.  As it goes through the ripening process, the flavor and heat of the pepper increases.  Picking a pepper before it turns red will give you a milder, less pungent pepper.

The shape and texture of this chili is similar to the Ghost and red Habanero peppers.  The exterior of the pepper is bumpy and filled with little grooves.  The most distinctive physical feature of this pepper is the “scorpion tail” that looks similar to a scorpion’s stinger.

Ways to Use Carolina Reaper Peppers

When you bite into a reaper, you’ll taste the sweet, fruity flavor before you realize the spicy hotness.  Some have described it as having a hint of chocolate or cinnamon.  Once the fruity flavor is gone though, you’ll begin feeling the intense burning of the hottest pepper in the world.  How do you use something this hot?  Using these hot peppers to make hot sauces is one of the most common uses of the Carolina Reaper.  Those who can handle the full heat cook with whole peppers.  Others use pepper flakes for dry rubs on meats.  Just remember to go easy if you are new to hot peppers.  You’ll build up a tolerance for the heat the more you consume them.  Also, remember to wear gloves when you are handling or cutting up the Carolina Reaper peppers. The oil can make your hands burn and you can spread the heat to other parts of the body.

It took 10 years to develop the tasty superhot Carolina Reaper pepper.  Capsaicin is the oil in peppers that make it hot.  It may also be useful for fighting diseases.  Capsaicin may have cancer-fighting properties.  All hot peppers have this substance, but the Reaper has a concentrated amount.  There are other health benefits, too.  It helps the body produce endorphins which are used to fight off stress and pain.  Endorphins can also be useful for helping to regulate mood and help lose weight since it can boost your metabolism.  Reapers are often eaten for their ability to fight off symptoms of the flu, allergies, and common colds.  Hotter chili pepper varieties are good for your heart and digestive system.

Myths About the Reaper

One of the biggest rumors about the Carolina Reaper is that you’ll die if you eat them.  This is simply not true.  However, if you eat a Carolina reaper pepper you may feel an intense burning sensation that makes you think it’s hurting your body. Unless you have an allergy to peppers or an ulcer, the Carolina Reaper won’t cause any damage.  They shouldn’t cause you any problem at all unless you know you have a negative reaction to spicy foods or hot peppers.  It is important to make this point though. If you are not used to eating spicy foods, don’t start with the Reaper.  Try some of the milder peppers and work your way up to the hotter ones.  If you find out you cannot take the heat of hot peppers, try drinking milk or eating ice cream for some relief.