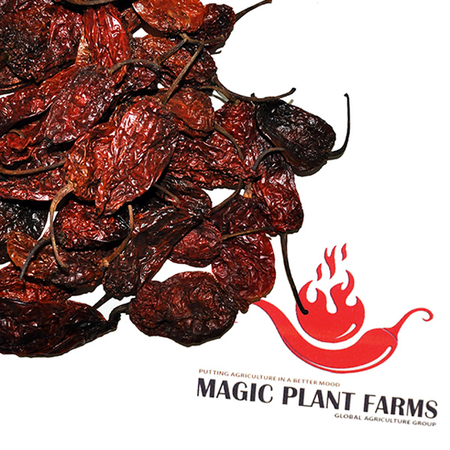 A mistake is attributed to the origins of the Chocolate Bhutlah.  Chad Soleski accidentally cross-pollinated a Red Bhutlah, a Bhut Jolokia (also known as the ghost pepper), and the Trinidad Douglah (which is also known as the 7-pot douglah or 7 pod brown.).  After the seeds were cross-pollinated, Chad gave what was supposed to be seeded for the Red Bhutlah to a friend who planted and grew them.  Once the plant produced peppers, he realized it was chocolate-colored pods being produced by his plant.  A large specimen of this new pepper was then sent to Ted Barrus,  who reviewed them on his website.  It may possibly be the new hottest pepper in the world, but we’ll have to wait for the final results to know for sure.

The most popular use of this new pepper is for mash and sauce.  However, it is also available in dried and flaked forms to use as an ingredient.  This makes it easier to manage how much hotness and flavor you want to add to soups, stews, and other dishes at a time.  Flakes can be sprinkled on anything from pizza to salad to add heat.  Chocolate Bhutlah pepper powder can be used in casseroles and added to rubs and marinades.

You’ll need soil in a cup or seedling tray with proper drainage.  The seeds should be buried at about a quarter-inch deep.  Start the seeds early.  You’ll want to give them 8 to 12 weeks before you plan to plant them outside.  This gives you time to plan and get them outdoors after the danger of frost is over.  This will also be time for harvest before the cooler temps come in during the fall months.

Peppers need lots of light.  The second they sprout up through the dirt, they need to be exposed to grow lights or sunlight.  For most, even fluorescent lighting works well for providing light.  You’ll need a fixture that is situated near the top of the plants. The first 4 to 5 weeks they need light at least ten-twelve hours a day with a resting period of darkness in between.  Then they can be switched over to a 16/8 light cycle. While the plants are indoors, pinch off buds before they start flowering.  The plant needs the energy to grow until it gets outside and in the right environment to bud, flower and produce.