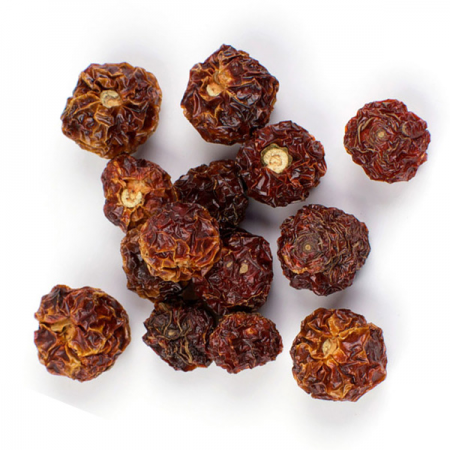 Wiri Wiri peppers are a small, round, cherry hot pepper. The round shape is distinctive of this chili as most peppers are long and come to a point.  It’s a hot chili and ranks between 100,000 and 350,000 on the Scoville Heat Scale.  The plant bears white flowers which produce the ½ inch peppers which turn from green then to orange and finally red as it matures.

History and Origin of the Wiri Wiri

Guyana is located in the northeastern region of South America. It is believed that this small country is the origin of the Wiri Wiri, which is why it is often called the Guyana pepper. Due to its cherry-like appearance, it is also called the Hot Cherry Pepper or referred to as a Bird Cherry Pepper.

The Wiri Wiri chili is relatively easy to grow. The plant thrives in a tropical environment but can be grown in many northern climates as well. To grow the chili in cooler climates, plant the seed the plants indoors and move them outside once the weather has warmed up. They can be grown as an annual plant very easily. Plants will typically produce in around 100 days as a general rule.

Uses of the Chili Pepper

The Wiri Wiri is a favorite pepper used for making hot pepper sauce. Since it is a tropically grown plant, the chili is used widely in the Caribbean and South America for making a variety of hot sauces. One Jamaican favorite is mango chili sauce. They can also be used to make pepper wine. After the peppers are mashed, cover them with rum and let them sit for a minimum of 3 weeks. This allows the rum to absorb the pepper’s flavor. The pepper wine can be used in different dishes but is popularly used in soups as a wonderful flavor enhancer.