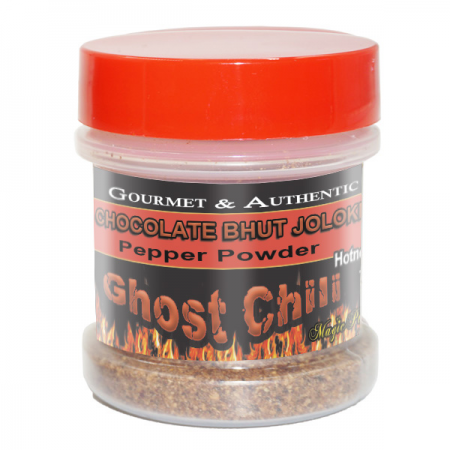 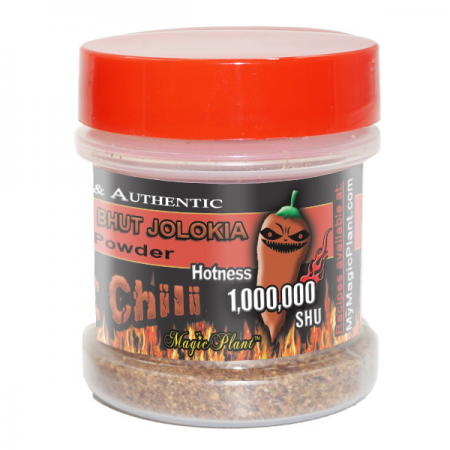 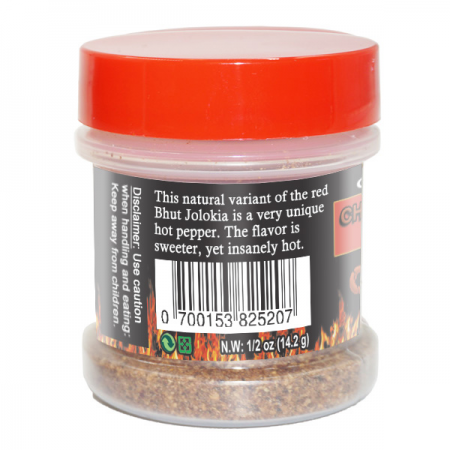 Bhut Jolokia Chocolate Powder - 1/2oz spices jar with sifter lid. the original Indian Bhut Jolokia with an AMAZING Hot flavor that will kick your tongue. In 2007 Guinness book of world records confirmed the Ghost Chili Powder For Sale is the hottest chili pepper in the world! WOW IT'S SO HOOOOT!!! Ghost Chili powder is good for cooking or just added to salsas. Cook with it if you Dare! Brew up your own private label of Ghost Chili hot sauce to give to your friends (and enemies)!
LIMITED EDITION - This item may be available for purchase for a limited time or until sold out. Earn higher profit margins by reselling Magic Plant Limited edition items.

The Chocolate Ghost Chili pepper is a dark brown color, which is why it bears the name “Chocolate.”  It has nothing to do with its taste. The pods grow to be between 5 and 8 centimeters in length and are gnarled-looking.  The heat level of this pepper is typically between 375,000 and 2 million SHUs.  Despite their intense heat, they have a nice fruity, smoky citrus flavor.  Just before the heat kicks in, you’ll experience a little bit of tang.  It can taste wonderful for as long as 45 seconds and then it gets hot, really hot.   The heat effect can last up to 30 minutes.

The Chocolate Bhut Jolokia, or Chocolate Ghost Pepper once reigned as the hottest pepper in the world. In 2007, its 1.041,427 Scoville Heat Units rating was the hottest tested at that time.   It has long been grown in the states of Assam, Manipur, and Nagaland as well as the other northern parts of India.  It is often called the Chocolate Bhut Jolokia after its Indian name.  The pepper is native to India and Myanmar, just like their red cousins.  They were not available to the western world until around 2008. Chili pepper enthusiasts can still have a difficult time finding them on the open market.  They typically are grown in areas where the temperatures do not drop too low during the summer months.

How the Chocolate Ghost Chili Pepper is Used

In India, the Chocolate Ghost Pepper is used to deter Elephants.  To deter Elephant entry, it is added to a binder, such as axle grease, and smeared on fencing enclosing villages and gardens.  It is used in military grade pepper spray.  For many years, it has been used in India and other regions as part of Ayurvedic medicine.  It is said to be beneficial for helping reduce inflammation and helpful for pain relief.

For ease of germination, it is not generally advisable to plant seeds directly in the ground.  Seeds should be started in trays about 8 to 10 weeks before transplanting outdoors.  After the seedlings have broken through the ground and have a couple of leaves, move each plant to a 4-inch pot.  After the weather warms up and the plants are a little larger, allow them to “harden.”  This process allows the tender plants to slowly adjust to being outdoors.  Set them out in the sun once the daytime temperature is above 65 degrees. Only let them set out for about 2 hours before bringing them back inside.  Slowly increase the time they are outside each day. Once the danger of frost is past they can be planted outdoors.

Chocolate Ghost Chili pepper plants grow best in well-drained soil.  Compost is always a plus.  You may need to provide additional calcium or phosphorus to increase the berry yield of the plants. Fish Emulsion is a good fertilizer.  High nitrogen fertilizers don’t offer a high yield of berries, they just make the plants leafy.  The Ghost peppers do well in raised beds, so the soil can drain properly.  If the soil is too cool, the plants and peppers will grow slowly.  Optimal growing temperatures are between 65 and 85 degrees. These peppers take longer to ripen on the plant and are best picked as soon as the skin becomes dark chocolate brown.